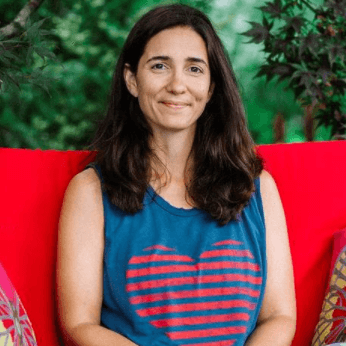 Angie Harris is a dedicated meditation practitioner, mindfulness teacher, and an engaged public speaker. Angie has spent the last decade coaching children and adults in schools, 1:1 sessions, in-person workshops, and online. Angie lives to support families and educators, helping them shift raging emotions into feelings of strength and calm.

She has practiced mindfulness and meditation for just over 20 years, after first being introduced to them when she was 19 and suddenly lost her mother.

Initially, she saw them as tools to temporarily manage grief, but she quickly became drawn to them on a deeper level. Her practice became a daily one, including yoga, taking time out to sit still, and reading about contemplative practice and its spiritual roots from all around the globe. Not only did she get a handle on her emotions, but she managed to stay in college and stay grateful for all the joyous things happening while healing from the loss of her beloved mother.

Years later, another personal tragedy took Angie from practicing mindfulness to teaching it.

In 2010, Angie’s sister was diagnosed with terminal cancer. At the time she had three young children, aged six, three, and one. Angie wanted to teach them the meditation and mindfulness strategies that had been such game-changers for her, so she began researching how to teach young children to meditate. Angie attended the Mindfulness in Education Conference with Mindful Schools cofounder Megan Cowan and Vinny Ferraro in 2010, and there found her true self, as a mindfulness teacher.

Today, when Angie is not teaching mindfulness, she is blessed enough to experience plenty of joy.
She can usually be found in a rink or on a field, watching her favorite eight kids playing everything from hockey to ballet, and football to piano.

She happily works with parents, educators, and other adults to set up both themselves and the kids in their lives for more emotional resilience and confidence.

Elmeka Henderson is a school psychologist and mindfulness educator. She brings both great passion and expertise to her teaching. She has been practicing mindfulness for over a...

Dr. Petersen has taught on all educational levels, ranging from elementary through college.  She has also worked with the immigrant adult population in the capacity of English...

Amber is an experienced educator with a specialty in mindfulness education. She has taught in a variety of classroom settings from Kindergarten to grade eight. Amber offers...

Director of Teaching and Learning

Kara-Lee is passionate about her work with the non-profit Space Between which brings mindfulness to students, educators, and families in Seattle and around North America through virtual...

Colleen Aagesen is a retired English teacher who has been teaching mindfulness to middle school students since 2018. In 2019 she joined 80 teachers from around the...

Hanna teaches children and their educators how to care for themselves and each other amidst the complexity of the school day by role modeling mindfulness teachings, community...